The Kingdom According to the Prophet Daniel. The clearest explanation of the Kingdom of God comes from the Book of Daniel, especially in chapters two and seven.  In chapter two, Nebuchadnezzar, the king of Babylon, has a dream of a great and frightening image with a head of gold, a chest and arms of silver, a core and thighs of bronze, legs of iron and feet made of a mixture of iron and clay (vv. 31-33).  All of the components of the statue are broken into pieces when a stone not cut by men strikes the feet of iron and clay.  The pieces of the statue are blown away and the stone grows into a great mountain that fills the entire earth (vv. 34-35).  Daniel prophetically interprets the dream, telling Nebuchadnezzar that he, and by extension Babylon, is represented by the head of gold (v. 38).  After Babylon, a lesser silver kingdom was to arise (v. 39), Medo-Persia.  This would be followed by the bronze kingdom (v. 39) of the Greek empire and finally the iron kingdom (v. 40) of Rome.

The feet of iron and clay is said to be a divided kingdom, partly strong and partly brittle (vv. 41-42).  The feet are made from something like Rome, or her remains, plus other peoples.  The feet are not said to be a distinct kingdom, and so we could consider them to represent Rome 2.0.  This reconstructed kingdom will have ten toes, symbolizing kings (vv. 42-43; cf. Dan. 7:24; Rev. 17:12).

And in the days of those kings the God of heaven will set up a kingdom that shall never be destroyed, nor shall the kingdom be left to another people. It shall break in pieces all these kingdoms and bring them to an end, and it shall stand forever, just as you saw that a stone was cut from a mountain by no human hand, and that it broke in pieces the iron, the bronze, the clay, the silver, and the gold. A great God has made known to the king what shall be after this. The dream is certain, and its interpretation sure.”

This divulges everything we need to know about when God’s Kingdom can be established.  It can only come about during the days when ten kings rule over the final iteration of man’s dominion (v. 44).  This is a yet future scenario.  God’s Kingdom will destroy and then supplant the kingdom of man.  The idea is one of immediate replacement, not one of an overlap for thousands of years.  The picture is of a stone striking the final human kingdom, instantly reducing the image to pieces to be blown away like chaff, leaving no trace of them (v. 45; cf. v. 35).  The mountain that the stone was cut from likely represents God (cf. Deut. 32:18).  A stone is commonly used to symbolize the Messiah Jesus (Ps. 118:22; Is. 8:14; 28:16; Zech. 3:9; Rom. 9:33; 1 Pet. 2:6-8).

The stone here would then seem to represent God’s Kingdom and her King Messiah, just as the head of gold represented Babylon and her king (cf. v. 38).  The stone growing into a mountain and filling the entire earth was used to picture the total dominance of God’s Kingdom (v. 35).  This mountain may be connected to the great mountain of Jerusalem, where the Messiah will reign from (cf. Is. 2:2-4).  Regardless, the Kingdom it portrays will never be destroyed (v. 44), just as was promised in the Davidic Covenant (2 Sam. 7:16).

Underscoring the replacement of man’s kingdom with God’s is how Daniel speaks of Nebuchadnezzar in verses 37-38:

You, O king, the king of kings, to whom the God of heaven has given the kingdom, the power, and the might, and the glory, and into whose hand he has given, wherever they dwell, the children of man, the beasts of the field, and the birds of the heavens, making you rule over them all—you are the head of gold.

Nebuchadnezzar was once the most powerful man alive.  He was not just a king but held authority over other kings (v. 37).  The LORD personally called Nebuchadnezzar the king of kings as well (Ezek. 26:7).  He was given dominion over all the nations and animals in that part of the world (v. 38; cf. Jer. 27:6-7, 14).  In this respect, Nebuchadnezzar serves as a kingdom of man counterpart to Jesus’s office in God’s Kingdom.  Jesus will reign as the true King of kings (1 Tim. 6:15; Rev. 17:14; 19:16), over not just part of the earth, but all of it (Zech. 14:9).  God gave Nebuchadnezzar a kingdom, power and glory (v. 37).  In telling us how to pray, Jesus reminds us that God has His own Kingdom, power and glory (Matt. 6:13).[1]  Nebuchadnezzar and Babylon were visible and earthly powers, just as the empires that followed.  When the great image is destroyed and replaced with the great mountain, the Messiah and His Kingdom will be all the more visible and earthly. 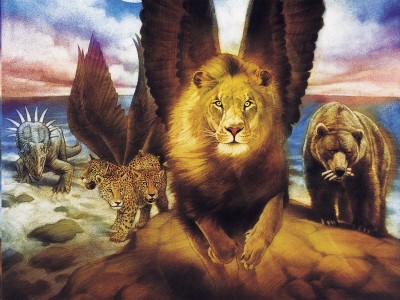 A companion dream is found in Daniel 7 that both confirms the interpretation of Nebuchadnezzar’s and provides us with more information and insight.  This time the dream that Daniel interprets is his own, one envisioning four beasts that represented kings and their kingdoms (v. 17).  Each one rose out of the great sea (vv. 2-3), meaning the Mediterranean area.  The first beast, representing Babylon, was a lion with eagle wings that were later plucked.  Then it was made to stand on two feet and given the mind of a man (v. 4).  Nebuchadnezzar and Babylon were compared to a lion and an eagle in several other places in Scripture (e.g. Jer. 4:7; Ezek. 13:3).

Nebuchadnezzar was greatly humbled, followed by his mind being returned to him (Dan. 4:28-37).  The second beast, representing Medo-Persia, was a devouring bear on its side, with three ribs in its mouth (v. 5).  The Persians defeated the three considerable powers of Lydia, Babylon and Egypt.  The third beast, representing the Greek Empire, was a four headed leopard with four bird-like wings (v. 6).  After Alexander the Great died, the empire was divided among his four generals in Asia Minor, Egypt, Macedonia and Syria (cf. Dan. 8:8).  The first three kingdoms came to pass, matching their detailed descriptions.  The same, then, should be expected from the forth.

The forth beast had iron teeth, it was terrifying and extraordinarily strong.  This beast represents Rome, extending into her latter form of being mixed with other peoples (cf. Dan. 2:41-43).  The remainder of the previous kingdoms were devoured, crushed and trampled.  This final beast has ten horns and is specifically said to be different from all those before (v. 7; Rev. 13:1), and that it will conquer the entire earth (v. 23).  The ten horns are ten kings that will arise out of this final kingdom (Rev. 17:12).  One of them will be distinct from the others and he will subdue three of them (vv. 8, 24).  This horn has the eyes of a man and a mouth used to utter boasts and speak against the Most High God (vv. 8, 25).  The evil king will wear down the saints and attempt to alter to the times and the law.[2]

He and his dominion will be annihilated and taken away forever (v. 26).  It is at this time that the sovereignty of all of man’s kingdoms under all of the heavens will be transferred to the people of the saints of the Most High for them to possess forever (vv. 18, 27).  It is explicitly written that their reign will be upon the earth (Rev. 5:10).  This could hardly be understood as being fulfilled at present.  The saints are not reigning over the world when they are being beheaded, tortured, mocked and minimized by the world.  Once begun, the Kingdom of God will be everlasting, with all the power structures on earth serving Him (v. 27).  Though the control of the kingdoms of man will be stripped, their peoples will still be permitted to survive for a time (v. 12; cf. Zech. 14:16).  This tells us that once the Kingdom of God begins, there will be a period of time where those who do not trust fully in the Messiah will still be living on the earth.  Therefore, there must be an intermediary period between the end of the kingdoms of man and the beginning of the sin-free Eternal State.  The Millennium is that intermediary age.

THE SON OF MAN IS GIVEN A KINGDOM 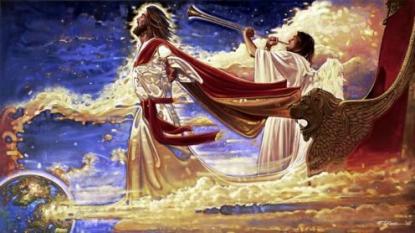 Daniel further writes of how the Messiah will come to take charge of His Kingdom in verses 13-14:

“I saw in the night visions, and behold, with the clouds of heaven there came one like a son of man, and he came to the Ancient of Days and was presented before him. And to him was given dominion and glory and a kingdom, that all peoples, nations, and languages should serve him; his dominion is an everlasting dominion, which shall not pass away, and his kingdom one that shall not be destroyed.

Simply understood is that when the Son of Man, the Messiah, comes upon the clouds, it is at that time when He will be given dominion and a kingdom (v. 13).  Furthermore, this kingdom is marked by all peoples on earth having to serve the Messiah (v. 14), something that most certainly is not happening in the present age.  Jesus references this passage as a sign of His return, that when after a time of tribulation, all the peoples of the earth will see Him coming on the clouds (Matt. 24:29-30).  The apostle John alludes to this passage, teaching that when Jesus comes on the clouds, every eye will see Him and that all of the peoples of the earth will mourn over Him (Rev. 1:7; cf. Zech. 12:10).  Therefore, the Messiah and His apostle both place the inauguration of the Kingdom, as envisioned by Daniel, at the Second Coming.  It will be an astonishing an unmistakable event that no one on earth will miss.  All of the intricate details of Daniel’s interpretations and the precise timeline he provides, must be fulfilled before the Kingdom of God replaces the final kingdom of man.  It is then when the power of world-wide governance will be handed over to the Messiah and His saints.  Man’s rule will end and the Messiah’s will begin.

Who is this Jesus? “But when he thought on these things, behold, an angel of the Lord appeared unto him in a dream, saying, Joseph, thou son of David, fear not to take unto thee Mary thy wife: for that which is conceived in her is of the Holy Spirit.  And she shall bring forth a […]

The sixth chapter of Revelation brings us to the beginning of the judgments of the wrath of God. Often before a storm there would be strange calm, a sense of foreboding in the air. One could almost feel the violent storm that was about to break. This is what we experience frequently in today’s world. […]

Why Did God Do That?

Why Did God Do That? I get a lot of questions about the relationship between God and Satan. Most of them are from people who want to know how God can tolerate Satan in His presence, and as far as I can tell the Bible offers no explanation for this. All we know is that […]

This site uses Akismet to reduce spam. Learn how your comment data is processed.

Eternity Is A Long Time To Be Wrong About Jesus Christ...

Watchers On The Wall

In Matt. 24:4-11, Mark 13:5-8, and Luke 21:8-11 Jesus identified a number of signs that would point to the approaching end of the age. He specifically named false messiahs, wars and rumors of war, famines, earthquakes, pestilence, persecution, apostasy, false prophets and signs from heaven.

See us on Social Cross

Rapture or Wrath Ministry Proudly Supports The Union Gospel Mission of Portland Or, which provides more than 200,000 meals a year to the homeless and people in need. In addition to meals, the Mission provides food boxes, a day room with coffee and snacks, clothing, hygiene items, referral services and emergency cold weather shelter to the homeless. https://ugmportland.org